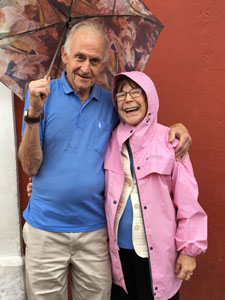 Suzi and Martin Oppenheimer, caught in a rainstorm while visiting AJWS grantees in Guatemala.

Suzanne (Suzi) Oppenheimer and her husband Martin have been active members of the New York philanthropic community for decades. Suzi is a former state senator and four-term mayor of Mamaroneck, who served her Westchester district for 28 years. “I got involved with AJWS a long time ago,” she says. “I knew Ruth Messinger from years of having been in government. She talked about AJWS from the very beginning.”

Martin later followed Suzi to the AJWS community, and says that, “once I learned more about what AJWS did, we became even more committed. We’re very active in Jewish causes, and the idea that AJWS looks outside of the Jewish context really appeals to our sense of humanitarianism.”

The Oppenheimers have continued to advocate for others through AJWS. “Some of the wonderful people that American Jewish World Service serves have the most incredible stories,” Suzi says, “and they’re doing remarkable things against unbelievable odds. I’m especially inspired by the empowerment of women and girls. Very often, women are left as the providers for their families after war or tragedy—but these women have stepped forward. They’re doing amazing things, and it’s wonderful to see that they are giving back to their communities.”

Martin adds: “Through press and radio, [the activists AJWS supports] are exposing staggering corruption and human rights abuses. These people are brave enough to pursue justice and tell the truth, even when they pay a heavy price for that.”

Suzi and Martin encourage their friends and other supporters of AJWS to consider the types of legacies they might leave to help support courageous activists like these and the other life-changing programs and initiatives. Together, the couple has made a bequest intention through their estate plan to support AJWS’s mission well into the future:

“We’re giving a legacy gift because it permits us to live our values worldwide,” they say. “We’re commanded by our tradition to pursue social justice—to care for the stranger.”